Tomorrow (20th May 2014) marks the start of the annual RHS Chelsea Flower Show. Attended by 157,000 visitors each year, the grounds of the Royal Hospital Chelsea are transformed into show gardens, inspirational small gardens and vibrant horticultural displays for the world’s most famous flower show.

The occasion has become an important venue for spotting emerging gardening trends, where new plants are launched and the popularity of older varieties are revived. This year sees an even greater emphasis on young designers, while the installation at the Great Pavilion pays homage to the centenary of the First World War.

Other highlights include a Beatrix Potter Tales of Peter Rabbit-inspired herb garden, plus Matt Keightley’s Hope on the Horizon display that was inspired by his experiences as serviceman in Afghanistan. 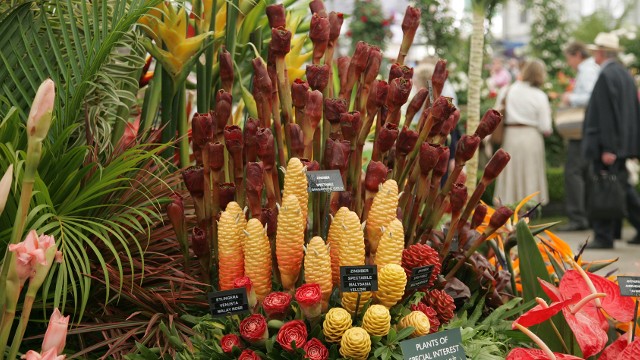 We spotted an interesting article on The Telegraph containing 15 facts about the Chelsea Flower Show, including how many visitors attend the show each year and how much champagne was consumed, which we wanted to share with you – here it is:

1. It takes 800 people 33 days to build the show from bare grass to the finished article, including the pavilion.
2. There were 244 exhibitors at the very first Chelsea Flower Show.
3. Today, 161,000 visitors visit the show each year.
4. There will be 550 exhibitors this year.
5. Hillier Nurseries holds the record for the greatest number of Chelsea Golds: 66 and counting.
6. Over the past 100 years there have been over 250 exhibitors from other countries. Holland has sent the highest number of exhibitors.
7. During the 2013 show, 8,743 glasses of champagne were served.
8. The Great Pavilion is 12000m, which is the same size as two football pitches and enough room to park 500 London buses.
9. There are around 100 exhibits in the Great Pavilion, mainly from nurseries and florists.
10. Over the century, there have been well over 5,000 exhibitors, ranging from nurseries to gardening product companies to amateur gardeners.
11. The tallest ever exhibit at Chelsea was ‘The Westland Magical Garden’ in 2012. It was designed by Diarmuid Gavin and featured an 80ft high pyramid.
12. In 2004 the Show was extended from 4 days to 5.
13. The 1951 Chelsea Show featured a gigantic Himalayan garden made up of 23 lorry loads of plants from RHS Garden Wisley.
14. In 2000, a new pavilion replaced the large canvas marquee which was cut up and turned into over 7,000 handbags, jackets and aprons, by the Old Chelsea Marquee Company.
15. The first Chelsea Show was staged in a single large tent.

Is your florist shop insured?

As a florist, you will be open to the public and will work directly with people, which presents risks; within your working areas there are conditions which could potentially become a risk, such as thorns and allergies. Having a tailored and comprehensive business insurance policy for your florist shop will help to protect your business against possible risks that could damage your profits.

At The Insurance Octopus, you will be able to tailor your florists insurance to the way you want it; all the essential cover you need in one business insurance policy. Speak to one of our specialists and get a quote today – call us on 0161 464 8601or email quote@insuranceoctopus.co.uk.